Zoom – The company has surpassed Microsoft Skype and Cisco Webex in video conference platforms during the pandemic. It offers cloud-based video, chat, voice, and content-sharing solutions across multiple devices, which became the choice method for working from home. The revenue jumped 88%, and adjusted net income increased by 514%.

C3.ai – The AI software company generated $157 million in sales, or equal to an increase of 71% from the previous year. The company has helped the utility industry by applying predictive maintenance and energy management to minimize unplanned shutdowns and reduce operating costs.

Lemonade – The stock had gone up by 400% since its IPO in July 2020. Lemonade disrupted the insurance industry by using digital services, big data, and artificial intelligence to serve its young demographic customers. Traditional insurance companies rely on agents and have a poor reputation when it comes to claims and payment.

Snowflake – The cloud warehousing company broke the record to become the largest IPO in the technology industry last year. The company has created a competitive advantage against Amazon and Microsoft as its software can run all the services. Snowflake controls 59% of the data warehousing market, which attracted Warren Buffet to acquire 2.2% ownership of the company.

Broadcom – The top dividend tech stock is currently paying a 3.1% yield with a payout ratio of 47% from its free cash flow. It is a safe dividend stock as it is paying $5.5 billion out of $11.6 billion of free cash flow. Broadcom supplies chips for wireless commutation, networking, storage, and data centers. The recent chip shortage will benefit the company in the short run.

Costco – The company gained market share during the pandemic. The shoppers reduce the grocery store visit and choose to buy the items in a large amount, which benefits the wholesale retailer. The revenue increased 11% in December and 16% in January, with 91% record-high membership renewal.

Nordstrom – The department stores made a major transformation into the digital channel. Online shopping rose 54% from its online shopping page, while in-store shopping continued to decline during the holiday season. The home and beauty are the highest growing segment among its portfolio.

Target – The sales increased 17% during the holiday season, on par with its major competitor Walmart. The increased traffic and rise of average spending contributed to its revenue, while Walmart only relied on higher spending as the number of transactions had declined.

The official account for Hivelr Business Journal to deliver the latest curated news in business, economics, and investments. Profile
5 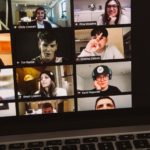