The recent economic data shows that the US economy shows signs of strong recovery after being hit by the coronavirus pandemic.

The latest economic data shows a record increase in GDP growth of 33.1%, a steady decline in unemployment, and a robust monetary policy that may influence the US election result next week. The American people will cast their vote on Tuesday next week while many of them have sent the ballot via mail on early voting, a decision to minimize the spread of coronavirus during the election day.

With the new cases on the rise, the stock market responds cautiously to the election result. Last week’s trading went through a bumpy ride as the S&P 500 volatility index jumped, bracing for the election results. Since March, despite strong earnings from technology giants such as Apple, Google, Facebook, Microsoft, and Amazon, the stock market ended a record weekly loss.

The recently published economic data from the Bureau of Economic Analysis shows that the income is rising, consumption is increasing, and production output increases. The economic recovery is still far from the condition before the pandemic, but the recent steady recovery signifies that the economy is heading in the right direction.

The Bureau of Economic Analysis, the US Government agency that releases the official macroeconomics and industry statistical data, published the third-quarter report on Thursday, October 29, 2020. The bureau reported that the US economy expanded 33.1.% at an annualized rate in Q3 2020 [1].

The third-quarter GDP report shows the largest economic expansion ever, following an enormous 31.4% plunge in Q2 2020 and a 5% drop in Q1 2020. The US economy was technically in recession due to negative growth in GDP for two consecutive quarters.

America’s biggest economic rival, China, also managed to avoid recession and had a V-shaped recovery in GDP growth driven by large domestic consumption, capital formation, and net exports. China’s economy expanded 4.9% in the third quarter, following a 3.2% growth in the second quarter and a 6.8% drop in the first quarter.

China’s speedy economic recovery was supported by the early lockdown, fast quarantine response, and experience from the SARS pandemic nearly 20 years ago.

Steady decline in the unemployment rate

More than 23 million jobs had been lost in the US in April and May, or equal to a 14.7% unemployment rate, due to the economic lockdown during the Coronavirus pandemic. The Federal stimulus program had helped the economy to absorb the shock of job loss overnight. Without the stimulus program, the economy could have gone into a deeper recession, and it will take longer to recover.

The unemployment rate had declined month-after-month as the economy started to reopen. More strict rules on social distancing were implemented, and personal protective devices such as face masks became available. So far, nearly 11 million jobs have been recovered, but the economy may enter another bumpy ride as new cases spike, the vaccine has not yet been released, and a new stimulus bill has not yet been approved.

Federal Reserve has not yet run out of the arsenal

The US stock market managed to have a V-Shaped recovery largely because of the Federal Reserve’s monetary intervention. The US Central Bank bought nearly $3 trillion of Treasury Bonds from the market between mid-March to June through a quantitative easing program.

The goal of quantitative easing is to inject liquidity (or cash) into the market to expand the economic activities, prevent panic selling in the financial market, and avoid the liquidity trap.

A liquidity trap is when people prefer to hold cash and delay any purchase because of the fear that the economy may collapse. This situation can cause “cardiac arrest” in the economy, leading to the great depression.

Quantitative easing is not merely irresponsible money printing that can cause hyperinflation, for example, in Venezuela or Zimbabwe. It is a bond-buying program in the open market that eventually brings down the interest rate to zero.

The zero interest rate allows businesses to borrow money for free during the crisis to cover their expenses. It pushes investors to allocate their capital to riskier asset classes such as the stock market to gain a return more than zero.

Quantitative easing is part of the Federal Reserve’s arsenal to absorb any market shock in times of crisis by expanding its balance sheet and selling back the government bond when economic activities return to normal [3].

The stock market had several short-term drops in July as the Federal Reserve sold some securities from their balance sheet as the economy started to reopen.

However, Federal Reserve bought back the securities by increasing its balance sheet in September because of more lockdown due to new cases and the anticipation for any market shocks from the election result.

The US has a robust fiscal and independent monetary policy that can weather any storm. The economic system has been tested for centuries, and it has been very successful. Many countries, such as Canada, the UK, Japan, the European Union, and more, adopt the same economic policy during a pandemic crisis.

Regardless of the election results, the US economy will continue to perform exceptionally well in the future.

Photo by Jonathan Dick on Unsplash 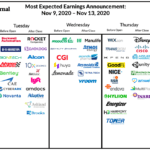