Stock market posts record loss a week before US election

The market continues the major sell-off on Friday, influenced by the US presidential election next week, the rise of coronavirus cases, and the new stimulus bill’s delay.

The Dow Jones Industrial Average (DJIA) drops 150 points, or 0.59%, closing at 26,501.06 at the end of the trading day. This marks the biggest weekly loss since the height of the Coronavirus pandemic in March.

The volatility index jumps as the market braces for the US election next week. Next week, the trading session will go through a choppy ride as investors are anxious about the US election result.

Trump is known for his protectionism policies that disrupt globalization. Defense, aerospace, oil & gas, technology, financials,  healthcare, and anything but China are the sectors that will be benefited if Trump is elected for a second term [2].

However, winning the most vote does not mean winning the election as the US uses an electoral college system. In 2016, Hillary Clinton won 3 million votes ahead of Donald Trump, but she still lost on the electoral votes [6].

Many believed four years ago that if Trump won, the market would go upside down. Yet, the unemployment hit a record low, inflation was relatively low, and the US economy was booming until the Coronavirus pandemic hit in the election year.

The latest data from Johns Hopkins University shows global death due to the pandemic hit 1.18 million, and nearly 230,000 death come from the US. The Coronavirus center also reports more than 45 million cases globally, and more than 9 million people are infected in the US.

The new restriction is implemented in Canada, Germany, and France to limit the Coronavirus spread. Still, the new lockdown measures will delay the re-opening of the economy and trigger sharp losses in the stock market.

The massive fiscal stimulus from the US administration and monetary policy intervention from the Federal Reserve to buy US Treasury Bond through Quantitative Easing had stabilized the stock market and prevent it from a meltdown.

However, two short-term volatility spikes in June and September were influenced by the fear of the second wave of the pandemic. But the volatility index hit another high, leading to the US election next week.

Investors are worried that the new economic restriction without another stimulus bill will cripple more businesses, create more job losses, and force more businesses to shut down.

Delay on the new stimulus bill

The US Senate delays the new stimulus bill talk until November 9, 2020. The chance to get both Democrat and Republication to reach the new stimulus agreement before the election is improbable. On his latest media appearance, President Trump commented that “we will have a tremendous stimulus package immediately after the election.”

The power split between Republicans who control the Senate and Democrat who runs the House makes it difficult to reach a bipartisan agreement over the stimulus. The economy desperately needs another stimulus facing the new restriction that prevents people from working and earn full income. 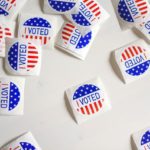