Advanced Micro Devices, Inc. (NASDAQ: AMD) shares were up more than 6% after the chipmaker released its first-quarter earnings. The company reported $1.13 earnings per share and $5.89 billion in revenue in the first quarter. It equals 117% earnings growth and 71% revenue growth year-over-year.

AMD presented strong guidance for the second quarter, with an estimated sales of $6.5 billion, higher than the analyst’s target of $6.38 billion. AMD’s key businesses reported double-digit growth after the economic reopening.

PC sales increased by 33%, driven by the central processing and graphic unit sales in the gaming PC and commercial markets. Meanwhile, Cloud revenue rose by 88%, fueled by growth in the data center market. AMD CEO claimed that the company has continually gained market share in the PC chip market for the last eight quarters.

The high demand for gaming consoles like PlayStation 5 and Xbox One contributed to AMD’s double-digit growth.

The technology stocks tumbled after the Federal Reserve announced the rate hike in March 2022 to fight inflation. It increases the borrowing cost, which leads to a reduction in equity valuation. AMD stock suffered a 39% loss since the beginning of the year, despite record sales last year and a 48% increase in gross margin. 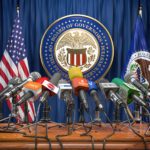