Berkshire Hathaway Inc. (NYSE: BRK.A) held a shareholder meeting in person for the first time after the COVID-19 pandemic. More than 10,000 people gathered in Omaha, Nebraska, listening to Warren Buffett and Charlie Munger about how the company spent $51 billion in the first quarter of 2022 on new investments, succession plans, and the Billionaire investor’s view on the stock market, economy, and cryptocurrency.

Berkshire’s earnings report revealed that the company issued stock repurchased for $3.2 billion and the cash holding has decreased from $147 billion to $106 billion in the first three months of this year. Buffet revealed the company increased its holding in Chevron from $4.5 billion to $26 billion. The oil giant became one of the top five most significant holdings in Berkshire’s portfolio.

In addition, Buffett increased its holding in Occidental Petroleum to 14% ownership and added a stake in Apple’s stock. Berkshire doubled down on the energy sector and expected a bull market in the oil and gas industry after suffering significant challenges during the pandemic. The geopolitical tension in Europe, diesel shortages, and limited supply create a big demand in the energy sector.

Buffett took advantage of the recent correction in the stock market to invest in HP Inc., Alleghany Insurance for $11.6 billion, and German companies. Buffett criticized Wall Street as a “gambling parlor” as many people wildly speculate in the stock market. It allowed Berkshire to purchase outstanding stocks at a discounted price, which is the cornerstone of Buffett’s Value Investing.

In the shareholder meeting, Buffett revealed the purchase of 15 million Activision Blizzard shares with a total holding of 74 million shares, equal to 9.5% ownership. The decision was made after the stock was selling below Microsoft’s acquisition price of $95 per share.

A year ago, Buffett announced that Greg Abel will succeed him as a CEO. Currently, Abel runs Berkshire’s non-insurance business while the two investment managers, Todd Combs and Ted Weschler, will take over the portfolio management.

Buffett assured the shareholders that Berkshire would continue to perform exceptionally with the new management. The holding company has a decentralized culture that relies heavily on the CEOs of the subsidiary companies to manage their business the way it should be run.

Charlie Munger, 98 years old Berkshire’s Vice Chairman, is the most prominent critic of cryptocurrency. Munger viewed bitcoin and other cryptocurrencies as “stupid because they will likely go to zero” and “evil because they undermine the Federal Reserve.” Munger hoped that the US should ban cryptocurrency, similar to what China has done.

High inflation has triggered the Federal Reserve to ease the easy money policy and hike the interest rate. It caused the growth stock to tumble to the lowest low since 2008. Buffett advised his shareholders that the best investment is to invest in themselves to create a competitive advantage. Someone will always pay for their products and services, regardless of the dollar worth.

Berkshire companies suffered the rising cost of materials and production expenses, but inflation has been expected after the government announced trillions of stimulus dollars during the pandemic. Since last year, Buffett has told investors that Berkshire is in great shape and able to endure the economic pressure from the pandemic, and is capable of rebounding as the economy recovers.

Berkshire has outperformed the S&P 500 index by 20% in the recent wild and volatile market. However, the first-quarter earnings declined by 53% due to high market volatility, as Berkshire owns many publicly-traded companies in its portfolio. The stock gained 10%, while the index lost 10% since the beginning of the year. 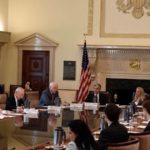