International Business Machines Corporation (NYSE: IBM)  is expected to earn $2.55 per share vs. $2.68 the same quarter last year. IBM struggles to compete with its big tech rivals in the last decade under the previous CEO, Ginni Rometty. In 2011, IBM was the 4th largest company in the US with a $216 billion market capitalization. Today, IBM ranks 72nd with a market capitalization of $112 billion.

The newly appointed CEO Arvind Krishna, who earned his Ph.D. from the University of Illinois at Urbana-Champaign, takes a bold measure by spinning off its Managed Infrastructure Services into a new company called “NewCo” and putting a laser focus into a $1 trillion hybrid-cloud platform business [1].

IBM is a safe dividend value stock, but IBM’s stock will not show significant appreciation until the hybrid cloud business delivers its promise. IBM’s current stock price is $125.93. The target stock price for IBM is $137 – $140 per share. Rating: NEUTRAL.

Netflix’s strategy to invest big in the original series has helped the company sustain its competitive advantage. Netflix’s decision to appoint Ted Sarandos as co-CEO helps the company transition into the next innovation [3]. Reid Hasting has done a good job to disrupt the video rental industry and defeat BlockBuster, but Ted will give a fresh perspective for Netflix’s business model in the future.

Netflix is a growth stock and will continue to outperform the market. Netflix’s market capitalization is $234 billion, and the current stock price is $530.79. The target stock price for Netflix is $541 – $570 per share. Rating: STRONG BUY.

Tesla, Inc. (NASDAQ: TSLA) is expected to earn $0.2 per share vs. $0.16 the same quarter last year. Tesla is leading the pack in the electric vehicle market. Tesla has delivered 139,300 vehicles in the third quarter [4]. Tesla operates factories located in California, Nevada, Shanghai, and the UK, and currently constructing two “Gigafactories” in Germany and Texas [5].

Tesla has turn profit in four quarters in a row, which qualifies Tesla to be a member of the S&P 500 index [6]. Tesla delivers a 425% gain from early this year vs. a 7.83% gain of S&P 500. Tesla’s next growth will be in China due to the large middle-class population and poor air pollution. China is the largest user and producer of electric vehicles in the world.

Tesla is a growth stock and has outperformed the market. However, Tesla’s stock is highly volatile, with a Beta of 3.41. Tesla may not be suitable for the stock of risk-averse investors. Tesla’s market capitalization is $410 billion, and the current stock price is $439.67. The target stock price for Tesla is $346 – $800 per share. Rating: BUY.

What is your analysis for the companies announcing their earnings this week?

Publish your analysis on Hivelr. Business Journal and join the conversation. 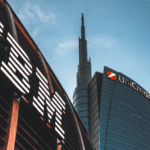