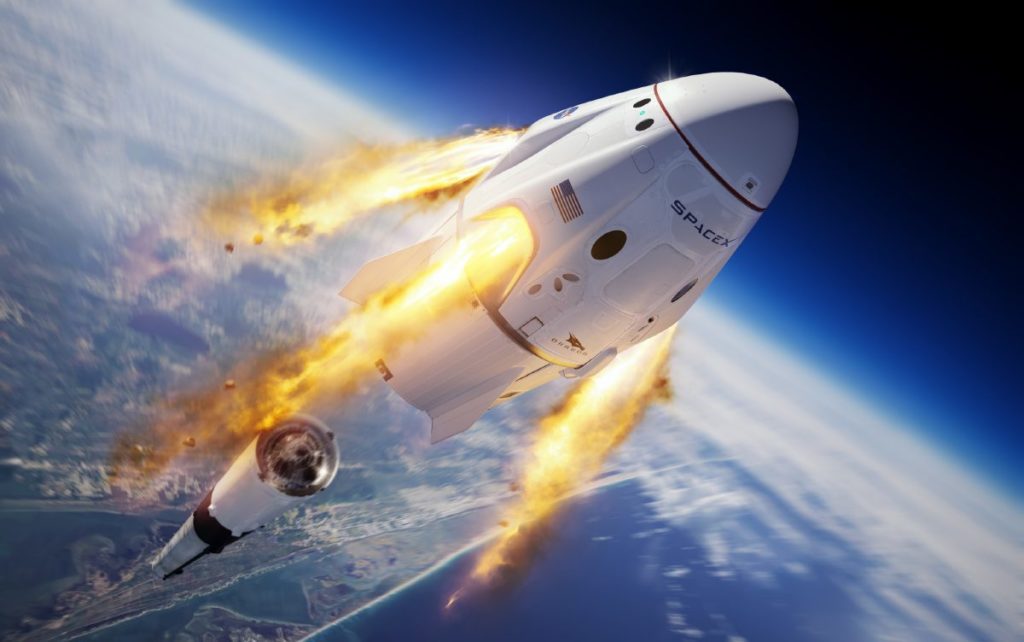 The world witnessed the next frontier of space exploration when SpaceX Falcon 9 Rocket launched Dragon. It is the first and only private spacecraft that has successfully carried humans to the International Space Station.

SpaceX was very close to bankruptcy 12 years ago after a series of failures in the rocket test launches [1]. Today, SpaceX is valued at $52 billion.

SpaceX is a private aerospace manufacturing and space transportation company founded by Elon Musk in 2002. The company is headquartered in Hawthorne, California. SpaceX’s main mission to enable humans to colonize Mars by revolutionizing space technology to make multi-planetary travel affordable. The mission is part of Elon Musk’s grand vision since college about the “future of humanity.”

Elon Musk founded Starlink, a subsidiary of SpaceX, to connect the world with the internet. The mission is to provide internet connection across the globe using a network of low orbit satellites. Starlink’s satellites will connect the locations that are previously unreachable with a reliable and inexpensive high-speed broadband internet network. The company plans to provide global coverage by 2021.

SpaceX’s journey started with a bumpy ride. The company was very close to bankruptcy after a series of rocket launch failures. SpaceX failed three rocket test launches and only had enough money to build the fourth rocket. With strong persistence and perseverance, SpaceX launched the last and only rocket the company could afford to build. It would have been the end of SpaceX if the company failed on the fourth and last test launch.

Despite mounting pressure and several technical glitches, SpaceX launched the fourth Falcon 1 rocket, and the result was a success. The next morning, Elon Musk received a phone call from NASA that SpaceX was awarded a $1.5 billion contract for commercial space flight. The contract value was enough to save SpaceX from bankruptcy. To date, the company has earned over $12 billion in contract revenue and conducted more than 100 launches safely with no major incident [2].

The long journey of rocket development started after the failed attempt to buy used Inter Continental Ballistic Missile (ICBM) from Russia due to the high cost. To date, SpaceX is the only entity after the United States, Russia, and China that can bring humans to orbit and bring them back to earth.

Dragon is the only spacecraft currently flying capable of returning significant amounts of cargo to Earth and is the first private spacecraft to take humans to the @Space_Station pic.twitter.com/vjjAlyK0Hl

SpaceX Dragon has a similar design as the command and service module (CSM) in the Apollo space program. However, SpaceX can squeeze the service module into the Dragon’s capsule and replace the service module section with a large trunk for cargo. The compact design becomes the critical feature for Dragon to optimize the propulsion system, maximize space for cargo, and carry more payload.

The capsule is equipped with a compact interior design and touchscreen flight control systems. The features provide more interior space and reduce significant weight, which allows the spacecraft to carry more people and cargo. SpaceX Dragon is equipped with 8 SuperDraco engines that will enable the Dragon to quickly separate from the launch vehicle in an emergency with 16,400 lbs (73 kN) of escape thrust.

The spacecraft has 16 Draco thrusters to maneuver in orbit, control altitude, and orient itself when docking into the International Space Station. Each thruster delivers 90 pounds of force in the vacuum of space. The Dragon’s trunk is equipped with solar panels to provide power during flight. The trunk remains attached during flight and separates just before the re-entry. The trunk carries unpressurized cargo and supports the spacecraft during ascent.

SpaceX is the first and only entity that ever successfully landed rockets after the launch. The reusable rocket technology will bring down the cost significantly and make multi-planetary travel affordable. The Starship is the latest and greatest development from SpaceX to bring humans to Mars. The spacecraft is currently in the testing phase. Yusaku Maezawa will be the first non-astronaut scheduled to fly around the Moon in 2023 [3].

In March 2020, Morgan Stanley valued SpaceX at $52 billion [4]. However, Elon Musk has no interest to take SpaceX public yet as it will hinder the company’s mission to establish a colony on Mars that will cost about $10 trillion [5].

Starlink, a SpaceX subsidiary that provides broadband internet service, may be a candidate for an IPO. Starlink is more suitable for going public as it generates more predictable cash flow than spending trillions of dollars on Mars colonization’s ambitious mission. SpaceX’s stock is not available to the public yet. The stock is only available for accredited investors in MicroVentures [6].

SpaceX is leading the race for space exploration with more successful launches ahead of its competitors, such as ULA, Blue Origin, Boeing, Virgin Galactic, and Lockheed Martin. As the demand for satellites and affordable space travel continues to grow, SpaceX is a desirable investment in the trillion dollars space industry.

Dow Jones breaks 30,000 for the first time in history