Welcome back to another series of the market call. Over the weekend, the US Senate passed the $1.9 trillion stimulus bill, and the market call’s weekend edition talked about how the stimulus package will impact the asset price across the markets with the central question: “Will the stimulus check trigger a further bubble or burst the markets?”

Another volatile trading day in the stock market as Dow Jones Industrial Average is up by 306 points while Nasdaq drops 310 points. The technology-heavy benchmark continues to fall into the correction territory. Apple, Tesla, Alphabet, and Netflix stocks have fallen up to 5.8%.

However, Disney has gained 6.27% after announcing the reopening of Disneyland in April as California relaxed the COVID-19 rules. Also, the stock of American Airlines and United Airlines jumped up to 7%.

The market rotation has caused divergence across the stock market indices. The price between the COVID-19 impacted stocks and technology companies moved in the opposite direction causing the broader S&P 500 index to go down by more than 20 points. Meanwhile, the volatility index shot up by 3.28%.

Both short-term and long-term Treasury bond yields rise by three basis points, indicating another sell-off in the bond market and causing the bond price to go down. The bond yield has increased in the recent week in anticipation of economic recovery and the concern about a rise in inflation.

Gold price is up by 0.25% to $1,682.40 per ounce in response to the concern of the rise in inflation. However, Bitcoin has taken Gold’s position as the inflation hedge, diminishing the price of gold over time.

Another big jump for Bitcoin price as it gains more than $3,200 in value and closes at $53,184.85 per coin. The launch of the world’s first Bitcoin ETF has created new demand for retail investors with no cryptocurrency exposure. Bitcoin is slowly taking over Gold’s role as an inflation hedge and it has outperformed gold more than 6% in today’s trading.

Voyager Station, the first hotel in space, will be built by Orbital Assembly Corporation and set to launch in 2027. The company is run by former pilot John Blincow, who also heads up the Gateway Foundation. The space hotel will have 24 modules connected by elevator shafts that make up the rotating wheel orbiting the earth.

Space travel and tourism have become very popular with the rise of space technology driven by SpaceX. The company has successfully carried humans and cargo to the International Space Station and currently testing the Starship for commercial space travel.

To celebrate International Women’s Day, we would like to introduce Diana Trujillo, the Flight Director for NASA Jet Propulsion Laboratory who successfully landed the Perseverance Rover on Mars on Feb. 22, 2021.

Diana was born and raised in Colombia. She traveled to the US at 17 years old after experiencing violence in her native country, with no English and $300 in her pocket. She took any job from housekeeping, cleaning bathrooms, working nights to put herself through college.

Eventually, she managed to graduate from the University of Florida with a degree in Aerospace Engineering. She was one of few women who graduated with a STEM degree (Science, Technology, Engineering, Mathematics) that year.

After graduation, she began her career in NASA to design the rover’s robotic arm to collect rock samples on other planets to determine whether there is life outside Earth. After several years, she was promoted to be the mission lead and flight director for NASA’s Jet Propulsion Laboratory to head the Perseverance mission and successfully landed the rover on Mars on Feb. 22, 2021.

Diana has become one of the best role models for young women to break the glass ceiling and achieving the impossible through hard work and perseverance. Congratulation on your success! 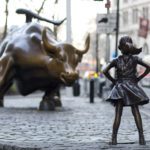