Good news comes from SpaceX after the company has successfully landed the Starship SN10 prototype. The program had multiple setbacks after a series of failures and explosions from the previous flight tests. It is a historic moment for space exploration to enable humans to become multi-planetary species.

Meanwhile, the successful landing of Perseverance Rover on Mars will start the groundwork to find the evidence of extraterrestrial life on the red planet. The mission will also prepare the human’s colonization outside the planet Earth.

After celebrating Elon Musk’s success in delivering the impossible and marking the journey into the trillion-dollar space industry, let’s look at what’s happening in the market and try to understand why the stock market has dropped so much in the last couple of days.

The stock market turns red after the volatility index (VIX) jumps more than 10%. The fear of inflation drives the volatile trading, and technology stocks took the big hit. Nasdaq drops more than 360 points, or equal to 2.7%, while Dow Jones Industrial Average only drops 0.39%.

Technology stocks have prospered during the pandemic as people rely more on digital technology to continue their daily life. However, as the economy recovers and the vaccine rollout continues to achieve success, people are starting to move away from lockdown and spend more time outside their homes. This condition drives up the undervalued stock like energy and cyclical sector and outperforming the technology sectors.

As the brick-and-mortar economy is recovering, the fear of inflation becomes the main subject of many policymakers worldwide. The pandemic-era monetary and fiscal interventions have driven the interest rate near zero and put extra cash in everyone’s pocket through the stimulus program. This combination can trigger a sudden rise in the price of goods and services in the economy and drive inflation.

Therefore, the government and central banks across the world are very cautious when re-opening their economy. The process has to be done in stages and slow to prevent a sudden spike in prices that will trigger inflation. The rise of the US Treasury Bond yield indicates that the Federal Reserve slows down their bond-buying program or quantitative easing.

As demand for bonds from quantitative easing reduces, the market liquidity will also decline. Less cash injection to the market means less money available to buy other asset classes. This mechanism has caused a sharp decline in demand for stock and gold which trigger the sell-off. The steepening of the yield curve will improve the profitability in banking and financial sectors.

The rise of US Oil production has been the culprit of the fall of oil prices. The US has transitioned from the largest importer to the largest oil producer in less than a decade. It has created a supply shock in the global oil market and depressed the oil price for a long time.

Furthermore, the pandemic has cut down the investment in oil exploration and production which will create a shortage in the short run when the economy returns to normal. The oil price will stay round $60 per barrel or more in the long run.

Bitcoin once again hit the $51,014 mark after the Chinese government is shutting down the Bitcoin mining operation in the Inner Mongolia region. Tesla’s stock has dropped so much after announcing $1.5 billion worth of bitcoin at $44,200. Soon, Bitcoin will reach its previous record at $1 trillion market value when it hits $54,000. Tesla has a strong position in bitcoin and the stock price will recover with a strong operating margin in electric car production. 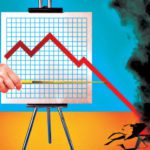