The value investing legend owns more than $127 billion in Apple Inc.’s shares and $33.5 billion in Bank of America.

Warren Buffett owns more than $271 billion worth of stocks from publicly-traded companies through Berkshire Hathaway. The stock list is available to the public from the most recent filing with the Securities and Exchanges Commission [1]. Apple Inc. is the largest holding, followed by Bank of America and Coca-Cola.

The SEC filing shows that Berkshire owns more than 965 million shares of Apple Inc., which is worth $127 billion and representing 47% of the portfolio. Bank of America stocks account for 12% of its holding with a $33.5 billion market valuation. And, Coca-Cola shares account for 7.5%, worth more than $20 billion.

Berkshire Hathaway is a $550 billion diversified holding company that manages subsidiaries and owns publicly traded companies’ stock. The total marketable stock holding of $271 billion means that the public stock holdings account for more than half of Berkshire’s market capitalization. Therefore, the performance of the investment portfolio in the stock market will highly influence Berkshire’s stock performance.

Based on the most recent SEC filing, Berkshire Hathaway is currently holding stocks from more than 50 public companies listed on the US Exchanges. Many of them are in Technology, Financials, and Healthcare sectors. The following is the deep-dive review, tickers, total shares, total value, and percentage holding of Warren Buffett’s investment in public companies’ stock.

Buffett’s total holding in the technology sector is $132 billion. At the beginning of the dot-com bubble of the 1990s, the billionaire investor was famously reluctant to invest in technology stocks. He firmly believed that the stocks had no intrinsic value due to the absence of tangible assets and cash flow. He preferred more predictable companies with strong earnings like Coca-Cola. However, his prediction became a reality after the dot-com bubble crash and sent many technology companies to bankruptcy.

Meanwhile, his perception of technology stocks started to change in 2016 when he bought $1 billion worth of Apple shares. The iPhone maker became a trillion-dollar company on Aug. 2, 2018, and hit a $2 trillion market valuation on July 31, 2020. The pandemic has accelerated the digital economy revolution and shifted consumer behavior from analog to the digital world.

The “Oracle of Omaha” also owns more than 6 million shares of Snowflake Inc., a cloud warehousing and analytics company, before the IPO in 2020. Today, his Snowflake holdings worth nearly $2 billion after it became the largest IPO for a software company on Sep. 16, 2020. Besides, Buffett has $1.6 billion worth of Amazon stocks and $1.2 billion of StoneCo shares.

Banking and insurance will continue to become Buffett’s cornerstone investments. The float from insurance premium has become the primary source of free capital for Buffett to acquire a new subsidiary company and marketable securities. The total holding in the financial sector is $80 billion.

The strategy worked well for the last 56 years and yielded a 20% annual return. In 1964, Berkshire Hathaway’s stock worth $11.50 per share, and it is trading at $352,039 per share today. Other than Bank of America, the value investing legend holds a sizeable position in American Express, Wells Fargo, U.S. Bancorp, and Moody’s Corporation. He also has nearly $4 billion worth of JP Morgan, Visa, and Mastercard stocks.

The total stock holding in the healthcare sector reached $11.3 billion. The healthcare sector becomes the frontline in the battle of the COVID-19 pandemic. The healthcare and pharmaceutical industry will have upside potential for the production of COVID-19 vaccines and the comeback of the Democrats in the government. Obamacare will be likely to come back after being removed during Trump’s administration.

Among the healthcare companies, Buffett has a significant position in DaVita, AbbVie, Bristol-Myers Squibb, Merck & Co, Teva Pharmaceutical, Biogen, Pfizer, and Johnson & Johnson. They represent 4.2% of the overall portfolio. Furthermore, Berkshire is in partnership with Amazon and JP Morgan to develop Haven Healthcare to improve healthcare services while making primary healthcare more accessible [2]. 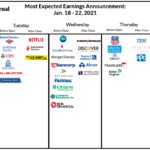